The Rise of the Crossover: The segment that’s really driving the auto industry’s sales

Over the past 20 years, a new type of vehicle called a ‘crossover’ has quietly taken over the automotive industry. Crossovers have grown from under 4% of the market in 2000 to nearly 40% in 2018. The growth in popularity of crossovers has taken market share nearly equally from both cars and larger vehicles like pickups, minivans and SUVs, as illustrated below in Figure 1. 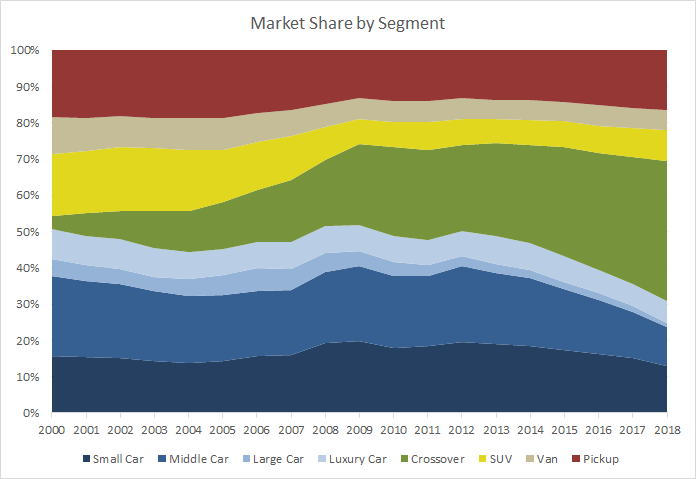 Even if you’re not familiar with the term ‘crossover,’ you’re certainly familiar with what they look like. Industry news and analysis firm Wards defines a crossover as “Typically wagon body style with unibody construction, front or all-wheel drive and passenger vehicle qualities being the dominant characteristic with limited off-road capability.” In other words, crossovers are beefed-up station wagons and hatchbacks, sometimes designed to look like an SUV, but that drive and handle more like a car, and aren’t really designed for true off-road capabilities. Most of these vehicles are also built on car platforms. For example, the popular Toyota RAV4 is built on the same platform as the Camry and Corolla sedans. This contrasts with true SUVs which have more robust off-road capabilities and are frequently built on pickup truck frames. Another big difference between the two is fuel economy. The average crossover gets almost 26 mpg, with the most popular versions achieving car-like fuel economy, while the average SUV gets around 19 mpg, only 0.5 mpg better than the average pickup truck.

This shift to crossovers, however, is often masked by the tendency to combine all pickup truck, SUV, and crossover sales into one category called “light trucks.” This lumping together of car-like crossovers with pickups and SUVs leads to a misunderstanding of consumer preferences. Over the past few years, this misconception has led to a trend of news stories concluding that consumers only want large SUVs and pickup trucks. What’s more, carmakers are encouraging this point-of-view, as they profit from the sale of larger vehicles. However, this narrative is false, as the majority of “light truck” sales have actually been smaller crossovers, while pickup trucks and traditional SUVs each made up less than 20% of “light truck” sales in 2018.

So here’s the real story. Over the last two decades consumers have moved from conventional sedans and boxy SUVs to station wagons and hatchbacks with sexier curves and better marketing. These vehicles drive and perform very much like traditional cars, but provide more passenger and cargo space with a relatively small tradeoff in fuel economy and cost. The three top selling crossovers (Toyota RAV4, Honda CR-V, and Nissan Rogue) only get an average of 10% less fuel economy than the top three selling midsize sedans (Toyota Camry, Honda Accord, Nissan Altima), but provide almost 1.5 times as much cargo space. Furthermore, the average midsized crossover costs less than 5% more than the average midsized car.

The value proposition offered by crossovers has won converts from both drivers of sedans seeking more utility, as well as SUV and pickup truck drivers seeking more affordable and efficient vehicles. In this way, the rise of the crossover shows what many consumers really want from their vehicles: a combination of utility and good fuel economy. 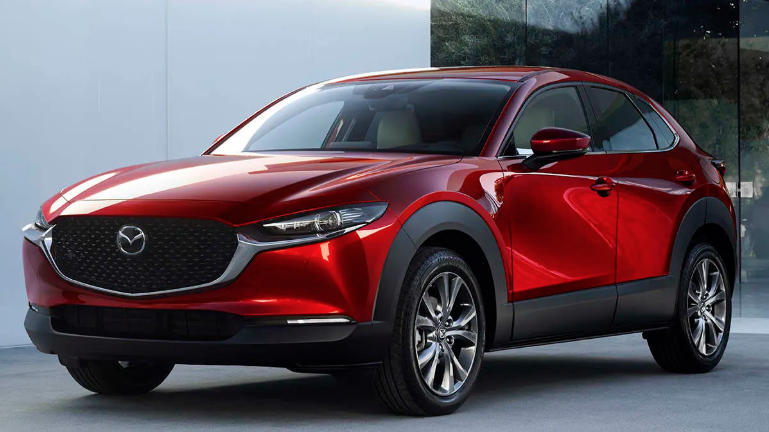