Why climate change and natural disasters go hand in hand

Floods, wildfires, hurricanes -- its getting dangerous to live just about anywhere. But what can you do? Well, a lot actually. 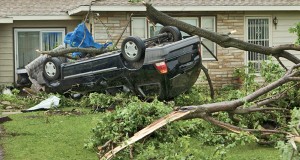 Super Storm Sandy forced climate change into the headlines, and the President highlighted its urgency in the State of the Union address. But most people have watched the figurative climate storm brewing for awhile.

Last year was the hottest year on record in the United States, and from the near-record low levels on the Mississippi River, to the terrible wildfires in the West, droughts that swept more than half the country have taken an enormous toll. Coastal erosion and destruction have worsened from Alaska to the East Coast, and every region will suffer ill effects from a warming climate. Scientists and economists predict the costs of new and more severe weather patterns will continue to rise. So, what can we do?

First, it’s helpful to understand where greenhouse gas emissions — which at current levels are accelerating climate change — come from. Here’s a breakdown of ghg emissions in the U.S. by source.

Second, there are simple steps we can all take to reduce our carbon footprint. Many of them save money and are better for our health — walking or choosing local activities instead of driving, cutting energy waste around the house, or reusing items around the house instead of buying new ones. Other steps such as installing solar panels or buying a more efficient vehicle can cost money upfront, but are often good investments that save money over the long haul.

And finally, we can call on our government and private industry to reduce carbon emissions and invest in cleaner, more efficient technologies. Most major companies now have carbon reduction targets, and fuel economy standards finalized last year will help curb emissions from vehicles.

But power plants in the electric sector constitute 40 percent of emissions and will have to reduce those to put us on a path that limits the worst climate change damage. The Environmental Protection Agency has the opportunity to complete new emission limits from power plants during the coming year, and we will keep you up to date on this effort.