Fuel Economy and Greenhouse Gas Vehicle Standards are working, according to EPA study

Imagine for a moment a road without rules. No speed limit? No waiting at red lights? As a driver, this might sound exciting! That is, until you think about the other cars on the road. Suddenly, it becomes obvious the rules are really important. They keep traffic moving at safe speeds, and they let the police pull people over if their poor driving endangers others. And when it comes to fuel economy — how many miles you can go for every gallon of gas you put in your car — the rules are also great because they encourage car companies to make cars that need less gas. Thanks to those rules, vehicles of all sizes — cars, SUVs and trucks — are all getting more miles per gallon than ever before, saving Americans a lot of money.

While some auto makers are doing better than others at innovating, all major car companies are currently meeting greenhouse gas emissions standards, and look to be on track to continue to do so, according to a new report from the Environmental Protection Agency (EPA). This improvement comes as auto companies are also able to deliver many other technological advancements, like automatic emergency braking with pedestrian-detection systems, in addition to continuing to provide generous horsepower and vehicle size. 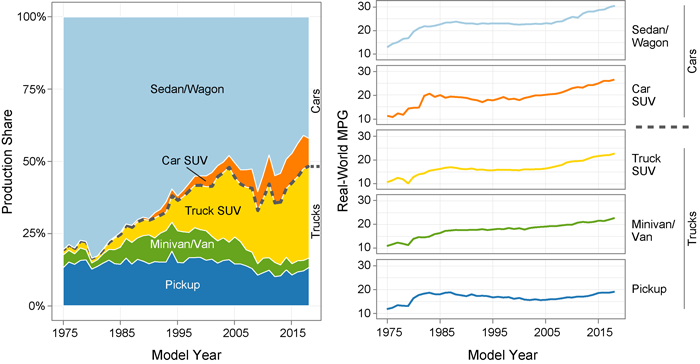 We saw similar trends in our recent analysis of Consumer Reports 2019 ‘Top Picks’ edition, that showed the best vehicles on the market were getting about 33 percent better fuel efficiency compared to just 10 years ago.

While the current EPA leadership recently announced plans to undermine the standards for future years, EPA’s new report actually reiterates why that’s a bad idea. Drivers don’t need to buy as much gasoline to go just as far thanks to the current rules, which have aligned fuel economy and greenhouse gas standards from DOT and EPA. What’s more, there’s no reason to think that even the automakers that sell a lot of trucks can’t meet the future standards, because the standards are flexible based on the types of vehicles sold.

As for those automakers lagging behind and relying on credits from past over-performance, the report also shows that many car companies could even be doing a lot more.

Overall, the results of the EPA study makes it plain to see that fuel economy and greenhouse gas standards are driving car companies to innovate, and consumers are saving a lot of money because of that innovation. It also makes it clear that rolling back the standards, as the DOT and EPA are planning to do, would slow the deployment of fuel-saving technologies, raise emissions, and lower consumer savings.

You can see the full EPA report by clicking here or explore the numbers for yourself here.