CU letters with recommendations on shattering sunroofs to automakers, Congress, and NHTSA 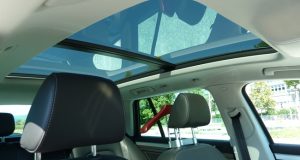 Consumers Union, the policy and mobilization division of Consumer Reports, writes regarding the risks to consumers posed by shattering sunroofs, as detailed in a new Consumer Reports special investigation published today. In this letter, we urge you to take several actions in response to our findings.

In a story available today at CR.org and in the December 2017 issue of Consumer Reports magazine, Consumer Reports explores the concerning, and surprisingly frequent, problem of sunroofs spontaneously shattering while consumers are driving. According to our analysis of consumer complaints to the National Highway Traffic Safety Administration (NHTSA) from 1995 to the present, at least 859 incident reports have been filed regarding sunroofs in U.S. vehicles suddenly shattering. While the exact cause of the shattering is unknown, 71% of the reported incidents happened in the last six years—during which time the size and popularity of sunroofs has grown as well.

Thankfully, no deaths or severe injuries have been officially linked to this hazard, but the reports do include at least 36 injuries, primarily minor cuts or scrapes. The falling shards of glass and unexpected bang associated with the shattering sunroof—described by one consumer as sounding “like a bomb”—could foreseeably distract a driver and result in a crash, causing much more serious harm.

Consumers should not have to face the risk of their sunroofs shattering when they are driving down the road—for no apparent reason and with little or no warning—and neither companies nor NHTSA should wait for serious injuries or fatalities to happen before acting on the very foreseeable risks. Unfortunately, the lack of widespread recalls is reminiscent of past approaches taken by automakers to drag out investigations to avoid providing consumers with an expensive repair. Companies that have yet to recall affected vehicles may be hoping that NHTSA either will exhaust significant time and resources building a bulletproof case that would withstand challenge in court, or let the investigation lag to focus on possible defects that pose an even higher risk. Neither pathway is a responsible approach to take.

Our overall conclusions prompt us to make the following recommendations:

In addition to examining NHTSA’s consumer complaint database, Consumer Reports interviewed affected consumers to learn more about this hazard. While exact scenarios differ, all of the reported incidents share a common factor: a sunroof suddenly shattering along with a shocking, loud noise, with no obvious or direct cause. One consumer explained that the shards of her broken sunroof would have fallen directly onto her children if the shade guard had been open.

The broad prevalence of shattering sunroof incident reports warrants action. These incidents have been reported for 208 vehicle models and 35 different car brands, and in a diverse range of driving conditions. Despite consumer complaints of shattering sunroofs across many vehicle makes and models, Consumer Reports confirmed that the Kia Sorento (model years 2011-2013) is the only car in the U.S. currently being investigated by NHTSA for a potentially defective sunroof. NHTSA launched this investigation in 2013, and recently, visible progress appears to have slowed. While the agency continues to analyze test data, it has not said when it will complete the investigation into whether this model contains a safety defect in its sunroof.

Thank you for your consideration of our special investigation on shattering sunroofs. Consumer Reports stands ready to work with you to address all vehicle safety hazards and to make cars safer for all consumers.