WASHINGTON, D.C. — Owning a plug-in electric vehicle today will save consumers thousands of dollars compared to owning a gas-powered vehicle, according to a new analysis by Consumer Reports comparing electrics to CR’s top-rated vehicles, as well as the best-selling, most efficient, and best-performing gas-powered vehicles on the market.

The analysis found lifetime ownership costs for the most popular EVs on the market under $50,000 are typically $6,000 to $10,000 less than the best gas-powered vehicles in their class*. Tesla’s Model 3, the best selling EV on the market, delivered the biggest savings: at least $15,000 compared to both the BMW 330i (best selling) and Audi A4 (top rated). 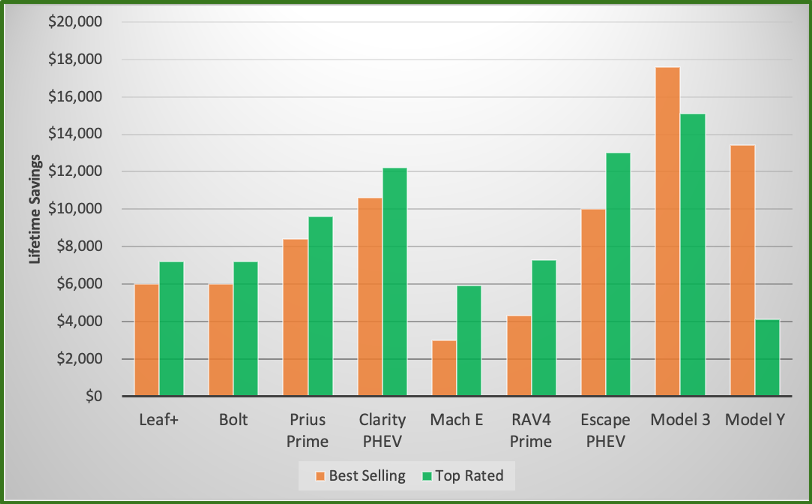 The overall out-of-pocket-costs for many consumers who finance will be lower in their very first year of ownership, despite the fact that the upfront cost of electric vehicles remains higher today than their gas-powered counterparts.

Where the savings come from:

“There’s been so much progress over the last few years that many mass market electric vehicles will now save consumers money right off the lot,” says senior policy analyst Chris Harto, who authored the new report. “Today’s mainstream electric vehicles have what many consumers are looking for, including enough range for most people to do their daily driving without relying on public charging, while also delivering excellent acceleration and a quiet ride.”

“The auto industry has spent most of its ad money tugging at our emotions and promoting gas-powered vehicle performance, but failed to market EVs, all the money they will save, and the performance they deliver,” says David Friedman, Vice President of Advocacy at CR. “The future of cars can and will be electric if the entire industry starts making and marketing compelling EVs for everyone. And that’s a future consumers are getting a glimpse of today.”

The white paper, and a fact sheet, are available to download as a PDF at the top of this webpage.