The leaked details appear to show that the administration is dead-set on this rollback despite the strong evidence that it will cost American drivers billions more in fuel costs. Thanks to the strong program in place currently, today’s vehicles are safer, more reliable, and more efficient than ever. Undoing the standards threatens this progress and future fuel savings for drivers.

This rollback only benefits oil companies at the direct expense of American consumers.”

While the administration’s own numbers appear to show a net loss from the rule, according to Senator Carper’s letter on the order of $34 billion to $41 billion, it’s likely that this is an underestimate of the losses, due to past flaws that have plagued the administration’s calculations and modeling throughout this entire process.

Consumer Reports analyzed several likely scenarios for a roll back, including the possibility of rolling back the standards from today’s rate of about 5% annual increases to just 1.5%. The analysis finds that requiring only a 1.5% annual increase would cost drivers thousands of dollars more, even after subtracting technology costs to improve fuel economy.

Weakening requirements to 1.5% would:

Below is a map showing consumer losses in each state from the 1.5% per year scenario. States with higher percentages of light truck owners are hit harder by a weakening of the standards than similar-sized states with more cars. In general, around 70% of the costs of the rollback scenarios will fall on drivers of light trucks. 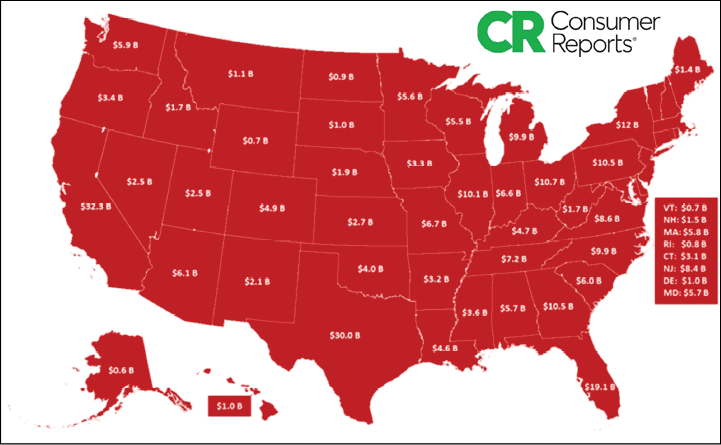