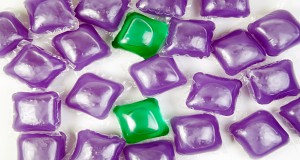 As the first ballot for the ASTM voluntary standards process for liquid detergent packets closed, consumer groups submitted negative votes but noted the progress that the standard activity has made.  The groups urged that additional provisions be included to better protect consumers from the hazards posed by laundry packets.

Laundry packets are popular, convenient, but sometimes dangerous products that can deliver hazardous chemicals to children in colorful, bite-sized packages that look like candy.  Based on two years of data, the National Poison Data System (NPDS) reported that 769 children required hospitalization for injuries that included seizures, vomiting blood, fluid in the lungs, dangerously slow heartbeats, respiratory arrest, gastric burn, and comas, as a result of ingesting the contents of these packets.  Overall, the NPDS has received 17,230 calls involving children exposed to chemicals by the packets.  An analysis of this data published in the November 14, 2014, edition of Pediatrics  found that in 900 NPDS cases showed that 42% of cases involved packets that were stored within sight or left out, 11% of cases involved temporarily open outer packages, and another 9% of cases involved improperly stored packets.

While the voluntary standard in its current form addresses the packaging container of the packets to some degree, and includes warning labels, more should be done.  Our organizations have urged that the voluntary standard not only ensure that the outer packages are child resistant, but also require that the packets are individually wrapped to prevent ingestion or eye injuries and that there are comprehensive requirements for addressing the taste and burst strength of the film covering the packets (based on current European Union (EU) requirements).  Multiple layers of safety are needed to protect children from hazards posed by laundry packets – particularly given that a significant number of children have gained access to loose detergent packets, and when they do, injury can be almost immediate.

In addition to actively working within the ASTM process, our groups support Representative Speier and Senator Durbin’s Detergent PACS Act, H.R. 1139/S. 588, legislation that would expand U.S. Consumer Product Safety Commission (CPSC) rules requiring child-resistant packaging to cover liquid detergent packets; address the design and color of the packets, so that they aren’t as attractive to children; address the composition of the packets, so that the consequences of exposure are less severe; and ensure the adequacy of the warning labels, to properly inform consumers about the risk.

Our organizations look forward to continuing to work within the ASTM process, as well as with Congress and the CPSC, to adequately address hazards posed by liquid detergent packets.

The Consumer Federation of America is a nonprofit association of nearly 300 consumer groups that, since 1968, has sought to advance the consumer interest through research, advocacy, and education. www.consumerfed.org

Kids In Danger (KID) is a nonprofit organization dedicated to protecting children by improving children’s product safety. KID was founded in 1998 by the parents of sixteen-month-old Danny Keysar who died in his Chicago childcare home when a portable crib collapsed around his neck. www.KidsInDanger.org

Consumers Union is the public policy and advocacy division of Consumer Reports.  Consumers Union works for a fair, just, and safe marketplace for all consumers, and to empower consumers to protect themselves, in the areas of telecommunications reform, health reform, food and product safety, financial reform, and other consumer issues.  Consumer Reports is the world’s largest independent product-testing organization.  Using its more than 50 labs, auto test center, and survey research center, the nonprofit rates thousands of products and services annually.  Founded in 1936, Consumer Reports has over 8 million subscribers to its magazine, website, and other publications. www.consumersunion.org