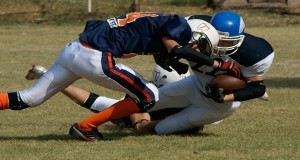 WASHINGTON, DC – New legislation introduced today would take steps to tackle the serious problem of concussions among child and teen athletes and the often misleading claims of injury prevention by sports equipment marketers.

“The sobering reality is that more than 300,000 concussions were diagnosed among high-school athletes between 2011 and 2012,” said Ami Gadhia, senior policy counsel for Consumers Union. “We should be even more concerned about the effects of concussions in these young athletes because their brains are still developing. That’s why we believe taking steps to improve helmet safety is so important.”

The legislation would allow the U.S. Consumer Product Safety Commission (CPSC) to use the findings of a study by the National Academies of Science study to create safety standards if necessary. In addition, the Federal Trade Commission (FTC) would be given the authority to take action against false or misleading claims related to sports equipment advertising and reconditioning, seeking to promote greater accuracy in the information that consumers rely upon when making decisions about purchasing sports equipment.

“Much more needs to be done to protect youth athletes from concussions and this bill begins the process of addressing this issue,” stated Rachel Weintraub, legislative director and senior counsel for Consumer Federation of America. “The Consumer Product Safety Commission and the Federal Trade Commission will now have a directive and additional authority to protect children from sports equipment that fails to protect them.”

Gadhia said, “Simply put, there is no helmet that can guarantee it will prevent a concussion. But many manufacturers’ claims lead consumers to believe that their children are safer than they really are. This legislation would help to make sure that there’s someone looking out for consumers and cracking down on misleading safety claims.”

Consumers Union recently joined with Consumer Federation of America and National Consumers League in sending a letter supporting the legislation to Senators Rockefeller and Udall. For a copy of the letter, contact David Butler or Kara Kelber at Consumers Union.