Consumers Union Urges Floridians to Vote “No” on Amendment 1 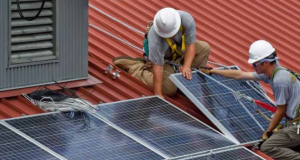 WASHINGTON, D.C. – Consumers Union, the policy and mobilization division of Consumer Reports, is urging Florida voters to reject Amendment 1, a ballot measure backed by the utility industry that would make it harder and more expensive for consumers to switch to rooftop solar power.

“Amendment 1 is a cynical attempt by the utility industry to deceive voters and would cast a dark cloud over the Sunshine State’s ability to take advantage of plentiful solar power,” said Shannon Baker-Branstetter, energy and environment policy counsel for Consumers Union.  “If Amendment 1 passes, the utilities would have an easier time charging Florida homeowners unfair fees and make it more costly to go solar.  That’s why we’re urging Florida voters to vote ‘No’ on Amendment 1 on November 8.”

The utility industry is marketing Amendment 1 as “pro-solar,” but the ballot measure could create new barriers and costs for consumers interested in generating their own power through rooftop solar panels, according to Consumers Union.  These fees are unjustified since studies in other states have demonstrated that the benefits of rooftop solar outweigh the costs to the electric system by between 40 and 100 times.

Expanding the use of rooftop solar panels throughout the state can benefit all Floridians, including those who don’t use them.  As more households switch to solar, the overall electric system costs are likely reduced, leading to lower costs for all ratepayers.

To date, Florida Power & Light, Duke Energy, and other big power companies have spent $16 million bankrolling Amendment 1, making their campaign to restrict customer-owned solar power one of the most expensive industry-backed ballot measures in the state’s history.