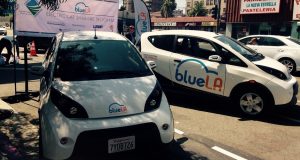 Los Angeles is the latest and largest U.S. city to launch an electric car sharing program. Named the “BlueLA Electric Car Sharing Program,” or BlueLA for short, the service will deploy 100 electric cars and 200 EV charging stations that will provide new transportation options for disadvantaged communities throughout the city. BlueLA will provide the benefits of expanded access to transportation and opportunity for residents while also contributing to statewide emissions reduction goals. This program will focus on low-income communities and serve portions of Westlake, Pico Union, Koreatown, Echo Park and downtown Los Angeles.

The project was funded by a $1.7 million grant through California Climate Investments, a statewide program that puts cap-and-trade dollars to work reducing greenhouse gas emissions, along with a $10 million investment by Blue Solutions, a division of the Bolloré Group, which also helped fund an electric car sharing program in Indianapolis recently. It is a part of the Charge Ahead California Initiative that is being supported by groups like The Greenlining Institute, Communities for a Better Environment, and Environment California.

Communities were selected for BlueLA based on resident income and vulnerability to pollution from traffic or industrial sources. Low-income neighborhoods are often disproportionately affected by air pollution, so reducing transportation emissions in these neighborhoods is especially important and impactful for public health.

While providing a blueprint to mitigate traffic congestion and harmful vehicle emissions, BlueLA will be particularly beneficial to underserved communities because it will help expand access to transportation, opportunity, and a better quality of life for residents. The electric vehicles will provide clean, reliable transportation options for low-income Angelenos to run errands, and get to medical appointments, job interviews, and school. Residents who don’t own cars will now have a new alternative to public transportation that they can use in their daily life.

By targeting low-income and underserved communities, these pilot programs show a willingness to reach people who could benefit the most from increased transportation access. They also match the national trend of states implementing programs designed to accelerate the growth of EVs. Volkswagen also recently announced plans to launch a separate electric car sharing program in Sacramento, as part of the settlement from its emission cheating scandal. As consumer purchases of EVs rapidly grow (2016 sales were up 37% over 2015), programs like BlueLA will help all income groups to enjoy the perks electric vehicles can provide.

Policymakers and advocates will be watching these pilots closely. If the electric car sharing programs being implemented by Los Angeles, Sacramento, and Indianapolis prove successful, they may be a model for other cities to learn from and duplicate moving forward.