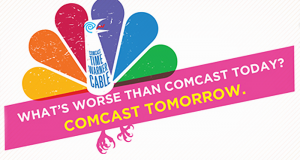 On Feb. 26, 2015, the Federal Communications Commission adopted new rules on net neutrality. Some business analysts have said that these rules might help ease the way for the approval of the Comcast/Time Warner Cable mega merger.

“The FCC’s push to guarantee everyone equal access to broadband may give regulators political cover to approve a deal while limiting Comcast’s broader power on the Internet. The proposed rules should alleviate concerns that Comcast will block or slow competing content providers’ access to the Internet, analysts say.”
— Bloomberg Business.

Here is why the net neutrality rules should have no bearing on the FCC’s and DOJ’s review of the proposed Comcast-Time Warner Cable merger:

The Stop Mega Comcast Coalition urges the DOJ and FCC to reject the Comcast/Time Warner Cable merger in the interest of sustaining a vibrant and diverse cable-and-broadband marketplace.

Mega Comcast by the Numbers: