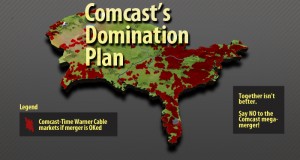 The Facts Behind The Merger

What is the Comcast / Time Warner Cable merger proposal?

Earlier this year, Comcast announced its plans to acquire Time Warner Cable for
$45.2 billion.1 If approved, the merger would combine the largest cable and broadband company in the U.S. with the number two cable company and third biggest broadband provider.2

As part of the proposed deal, Comcast has pledged to give up three million customers in an attempt to address concerns over its massive new size.6 But even so, the combined company would have about 30 million subscribers, or approximately 30% of the national pay-TV market.

Comcast and Time Warner Cable are two of the largest providers of video, highspeed data, and voice service in the U.S.7 The merger would give the two companies control of half of triple-play services – video, voice, and Internet – in the U.S.8

How much control would Comcast get over the cable and broadband markets?

Broadband: Currently, there are 83 million broadband subscribers in the U.S.11 The merger would give Comcast nearly 40% of the broadband market12 or almost twice as many high-speed Internet subscribers as the next largest company.13

Why is the Comcast merger a bad deal for consumers?

Combining two already big companies into one giant industry behemoth would give Comcast even greater control over the cable television and broadband Internet markets, leading to higher prices, fewer choices, and even worse customer service for consumers.

How will the merger lead to higher prices?

Comcast customers already pay an average of $156 per month,14 and over the last four years, Comcast has raised its basic cable rates in some of its markets by nearly 70 percent.15 A Comcast executive has even acknowledged that the company can’t promise that customer bills “are going to go down or even that they’re going to increase less rapidly.”16

Consumers who currently subscribe to Time Warner Cable can expect to be subject to these higher prices, but the deal has the potential to impact prices for all consumers. Cable prices have steadily climbed in the past decade, far outpacing the rate of inflation,17 and there is every reason to believe that they will continue to do so after the merger. Giving Comcast even more leverage in the media marketplace would allow it to extract hefty fees from potential competitors which would ultimately be passed down to consumers.

How will the merger result in less choice for consumers?

The merger will give Comcast tremendous power to control the type of programming available to an unprecedented number of consumers. This is especially true since Comcast now owns a wide assortment of content and television channels from its merger with NBC Universal. By owning a massive network of cable and broadband pipelines and significant content, Comcast would have an incentive to favor its own content over its competitors. That includes online video content from companies like Netflix, Hulu, and Amazon, which rely on Comcast pipes to get to subscribers. This could make it impossible for content providers to reach consumers in a cost-effective way, forcing them to cut costs and reduce quality, or even forcing them out of business.

Comcast has already experimented with placing data caps on some of its customers’ broadband use and charging lucrative overage fees for customers who exceed them.18 A future Comcast may be emboldened to cap user access to video streaming services, while exempting its own content from these caps. As a giant in the industry, Comcast’s actions might have a ripple effect and lead other broadband providers to follow suit.

How will the merger affect customer service?

The merger would combine two huge companies that already score poorly when it comes to customer satisfaction. According to the latest Consumer Reports survey of consumers. Comcast and Time Warner are among the worst-rated companies in overall customer satisfaction for TV service. Comcast ranked 15th among 17 television service providers included in the ratings and earned particularly low marks from consumers for value for the money and customer support. Time Warner ranked 16th overall for television service with particularly low ratings for value, reliability, and phone / online customer support.

These low rankings for customer service can be explained by the lack of competition in the cable market. Cable companies tend to be clustered in regional monopolies around the country, meaning that they do not directly compete with each other. When companies know that customers are unlikely or unable to switch providers, customer service becomes less of a priority. These companies already have little incentive to provide quality customer care. But a merged company with increased market power and an even larger national presence will have even less incentive to address consumers’ needs.

Who needs to approve the merger and what do they consider?

The deal will be reviewed by the Federal Communications Commission (FCC) and Department of Justice (DOJ), as well as a number of states.

DOJ: The DOJ’s analysis will address antitrust concerns and whether the merger would harm competition and reduce value and choice for consumers. At the end of its investigation, the DOJ can either (1) announce that it does not object to the transaction, (2) file a lawsuit in federal district court to block the deal, or (3) enter into an agreement with Comcast that requires the company to take certain steps to prevent or minimize the negative impacts from the deal.

FCC: The merger will also be reviewed by the Federal Communications
Commission (FCC), which must consider whether the deal serves the public
interest. While the DOJ’s analysis is generally limited to competition and antitrust
issues, the FCC considers a broader set of factors that could include the need to
preserve diverse and local programming, as well as the merger’s impact on the
access, affordability, and quality of telecom services.

States: States also have a role to play in merger review. States have their own antitrust statutes and can sue to block a merger even if DOJ decides not to challenge it under federal antitrust law. Over two dozen State Attorneys General have already announced that they will be reviewing the transaction.19

How soon are they expected to act?

The merger review process officially begins when Comcast files its applications at the DOJ and FCC, which is expected to occur any day now.

Comcast’s application will begin a long process at both agencies. While the DOJ’s process is generally not public, the FCC’s process will give the public and stakeholders the opportunity to voice their opposition to the deal over a period of many months, including during the formal public comment period. The FCC is expected to hold a number of public hearings on the merger in both Washington, D.C. and a few select cities.

Some expect the merger to be completed by the end of 2014, but there is no sure way to tell at this time.

How can consumers voice their opposition?

First, as mentioned above, all mergers of this nature must get the sign-off of the FCC. The agency will consider the concerns of consumers and other stakeholders after Comcast files its merger proposal with the agency. We’ve put together a simple means for you to submit a public comment on our Hear Us Now campaign web site, which we will deliver to the FCC.

Second, you’d be surprised by how many of your friends and family are not aware of this merger and share your frustrations with the cable industry yet have no way to express them. This campaign is their vehicle and the more supporters it has the more likely we are to stop this merger in its tracks. We are looking for Volunteer Comment Coordinators who, working alongside Consumers Union staff, will gather comments from their social networks. To learn more about becoming a Comment Coordinator contact Christopher at ccasey at consumer.org.