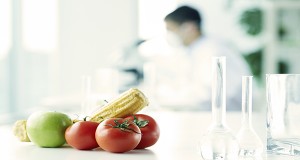 The primary reason GE food should be labeled is that genetically engineered food is fundamentally different.  Industry and their allies argue that GE is just an extension of traditional breeding, which humans have been doing for thousands of years.  However, GE represents an advance of monumental proportions beyond traditional breeding—the ability to move genetic material from any organism to any other organism as well as the ability to create genetic material that has never existed before. Traditional breeding involves transfers of genetic material between closely related organisms.  In contrast, GE has been used to move artic flounder genes into tomatoes, human genes into rice, and spider silk genes into goats. Indeed, many of the GE plants that have been commercialized have genetic material for viruses and bacteria inserted into them, including genes for antibiotic resistance; such traits could not be transferred via traditional breeding.  GE techniques, which were first discovered only a few decades ago, have been used in agriculture primarily to create commodity crops, including soy, field corn, canola, sugar beets and cotton, that can withstand herbicides, produce their own insecticides, or do both.