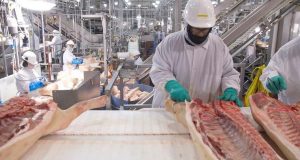 The undersigned organizations write to urge you to conduct one or more public meetings on the Proposed Rule on Modernization of Swine Slaughter Inspection. We also write to request that you extend the rule’s comment period for as long as necessary to allow the pending external peer review of the Food Safety and Inspection Service’s assessment of the rule’s impact, so that the review may inform public comments on the proposed rule.

Many groups, including many of the signatories to this letter, have already written to request public meetings and an extension of the comment period for this proposed rule. FSIS has responded by extending the comment period from 60 to 90 days. That response is inadequate. The proposed rule raises serious food safety, food security, worker welfare, and humane slaughter concerns. A former FSIS chief veterinarian has recently written that the proposed rule’s reliance on plant workers to inspect live animals “is dangerous because it compromises the vital role FSIS serves in detecting animal diseases.” More generally, the proposed rule would expand the Hazard Analysis and Critical Control Point (HACCP)-based Inspection Models Project (HIMP) pilot program for swine slaughter, a program whose five participating slaughterhouses include three of the top ten establishments most often cited for inspection violations. A public forum is necessary to fully inform the public of the agency’s intentions, and how it plans to mitigate the public’s concerns.

Likewise, FSIS should proceed through the rulemaking process with the utmost deliberation. Recently, FSIS set the comment period for a comparatively uncontroversial proposed rule to amend egg products inspection regulations at 120 days. This proposed rule deserves no less time for consideration. Indeed, more time may be warranted.

In particular, FSIS should give the public adequate time to consider the findings of an external peer review of its “Assessment of the Potential Change in Human Risk of Salmonella Illnesses Associated with Modernizing Inspection of Market Hog Slaughter Establishments (Jan. 2018).”