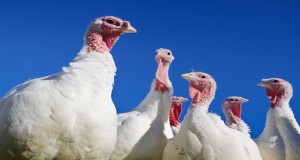 YONKERS, NY — In its first-ever lab analysis of ground turkey products, Consumer Reports found potential disease-causing organisms in most of the samples it tested, many of which proved resistant to more than three antibiotic drug classes. Consumer Reports tested 257 samples purchased from stores nationwide.

“Our findings strongly suggest that there is a direct relationship between the routine use of antibiotics in animal production and increased antibiotic resistance in bacteria on ground turkey. It’s very concerning that antibiotics fed to turkeys are creating resistance to antibiotics used in human medicine,” said Dr. Urvashi Rangan, Director of the Food Safety and Sustainability Group at Consumer Reports.  “Humans don’t consume antibiotics every day to prevent disease and neither should healthy animals.  Prudent use of antibiotics should be required to stem the public health crisis generated from the reduced effectiveness of antibiotics.”

The complete report and analysis can be found in the June 2013 issue of Consumer Reports and online at www.ConsumerReports.org.

Consumer Reports purchased 257 samples of raw ground turkey meat and patties, including products from major retailers and store brands, and tested them for the presence of five bacteria: enterococcus, Escherichia coli (E. coli), staphylococcus aureus, salmonella, and campylobacter.  Below are some key findings. Additional data will be available at www.ConsumerReports.org.

·       Overall, 90 percent of the samples had one or more of the five bacteria for which they were tested.
·       Bacteria on ground turkey products labeled “no antibiotics,” “organic,” or “raised without antibiotics” were resistant to fewer antibiotics overall than bacteria found on conventional products.
·       Bacteria related to fecal contamination were found on the majority of samples. Sixty-nine percent of ground-turkey samples harbored enterococcus, and 60 percent E. coli.
·       Three samples were contaminated with methicillin-resistant staphylococcus aureus (MRSA).
·       Salmonella, which is one of the top causes of foodborne illness, was found in 12 of the samples tested (5 percent) and two-thirds of them were multidrug resistant; government studies typically find higher rates of salmonella, at around 12 percent. Processing plants are permitted by the government to have product contamination rates as high as 49.9 percent.
·       Consumer Reports also found much more resistance to classes of antibiotics approved for use in healthy turkeys to promote growth and prevent disease than for those not approved for such uses.

Common slip-ups while handling or cooking can put consumers at risk of illness. Although the bacteria Consumer Reports found are killed by thorough cooking, some can produce toxins that may not be destroyed by heat, so take the following precautions:

Tips for Choosing Meaningful Labels while Shopping for Turkey:

·       Buy turkey labeled “organic” or “no antibiotics,” especially if it also has a “USDA Process Verified” label, which means that the agency has confirmed that the producer is doing what it says.
·       Consider other labels, such as “animal welfare approved” and “certified humane,” which mean that antibiotics were restricted to sick animals.
·       Be aware that “natural” meat is simply minimally processed, with no artificial ingredients or added color.  It can come from an animal that ate antibiotics daily.

Tips for Safer Preparation and Handling:

·       Buy meat just before checking out, and place it in a plastic bag to prevent leaks.
·       If cooking meat within a few days, store it at 40º F or below.  Otherwise, freeze it. (Note that freezing may not kill bacteria.)
·       When cooking ground turkey, use a meat thermometer to ensure it reaches the proper internal temperature of at least 165º F to kill potentially harmful bacteria.
·       Wash hands and all surfaces after handling ground turkey.
·       Don’t return cooked meat to the plate that held it raw.
·       Refrigerate or freeze any leftovers within two hours of cooking.

What Regulators and Congress Should Do

Consumers Union, the policy and advocacy arm of Consumer Reports, has urged the U.S. Food and Drug Administration (FDA) to restrict the use of antibiotics in food animals since the 1970s. The FDA should prohibit antibiotic use in livestock except for the treatment of veterinarian-diagnosed sick animals.

“The current FDA guidance is not adequate—it simply calls for voluntary changes by industry.  This will not get the job done,” said Jean Halloran, Director of Food Policy Initiatives at Consumers Union, the advocacy arm of Consumer Reports.

Consumers Union believes the FDA – or Congress, if the FDA will not act – should take the following steps:

·       Phase out the use of antibiotics in livestock except for the treatment of sick animals.
·       Require drug companies and feed mills to disclose sales of antibiotics for use in food animals, broken down by drug, animal species and purpose (growth promotion, disease prevention, disease treatment).

Consumers Union further urges the US Department of Agriculture (USDA), which is charged with ensuring the safety of ground turkey, to do the following:
·      Reduce its current allowable level of salmonella contamination in ground turkey tests from 49 percent, to at most 12 percent, a standard most of the industry already meets.Require strains of salmonella that have previously caused human illness, and that are also antibiotic resistant, to be treated as adulterants.

·      Require company HACCP plans – mandated by USDA to limit contamination–to include testing for salmonella strains that may be present and identify antibiotic-resistant organisms as a hazard likely to occur.

Consumer Reports is the world’s largest independent product-testing organization. Using its more than 50 labs, auto test center, and survey research center, the nonprofit rates thousands of products and services annually. Founded in 1936, Consumer Reports has over 8 million subscribers to its magazine, website and other publications.  Its advocacy division, Consumers Union, works for health reform, food and product safety, financial reform, and other consumer issues in Washington, D.C., the states, and in the marketplace.