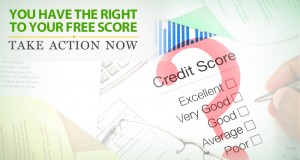 WASHINGTON, D.C. – Consumers Union, the policy and advocacy division of Consumer Reports, strongly endorsed bills introduced in Congress today to require credit scores to be included in your free, annual credit reports.  These scores would be the same ones used by lenders and other companies to make financial decisions about you.

Pamela Banks, senior policy counsel for Consumers Union, said, “Knowing your credit score is essential to managing your  finances.  Your scores have a huge impact on your life, but you typically have to pay for them, and the scores you buy may not even be the ones your lenders use.  This bill would help consumers get the credit scores they need, and it would take some of the mystery out of the credit reporting industry.”

Consumers Union has launched a campaign in support of the legislation.  Since January, the nonprofit organization has reached out to consumers via email and social media, urging them to ask Congress to back a bill that would provide reliable scores with their annual free reports.  More than 60,000 consumers have already sent messages to their lawmakers in support of this reform effort.

Consumers Union has long advocated for including credit scores in the free reports available at AnnualCreditReport.com.  While federal law guarantees you a free report every 12 months from each of the three major credit bureaus – Equifax, Experian, and TransUnion — the reports do not include your credit scores.  The three-digit scores, usually ranging from 300-900, may be used by lenders, bankers, insurers, landlords, and others to determine your creditworthiness and the rates you pay for services. Consumers typically have to pay for credit scores or sign up for trial offers that may have hidden costs.

Of special concern to Consumers Union is the difference between the credit scores sold to consumers and the scores actually used by creditors and other businesses.  When buying credit scores, about one out of five consumers are likely to receive a meaningfully different score than the one used by a lender, according to a Consumer Financial Protection Bureau study published in September 2012.

For a fact sheet about the bill prepared by the sponsors of the legislation, click here.  For the full text of the bill, click here.

Consumers Union’s petition in support of the legislation is available online at defendyourdollars.org.