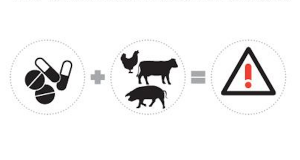 LOS ANGELES, CA – In a full page ad in the Los Angeles Times, Consumers Union, the policy and advocacy arm of Consumer Reports, called on Trader Joe’s today to stop selling meat and poultry from animals raised on antibiotics. The ad highlights how the overuse of antibiotics by the meat and poultry industries on healthy animals is promoting the spread of drug resistant superbugs that threaten public health.

“It’s critical that we do everything possible to curb the growing public health crisis of antibiotic resistance,” said Jean Halloran, Director of Food Policy Initiatives for Consumers Union. “Virtually every respected medical and public health organization agrees that we must reduce the use of antibiotics in healthy livestock in order to preserve the effectiveness of these drugs to treat disease.”

Consumers Union has pushed Congress and the FDA to take action to curtail antibiotic use in meat production, but these efforts have been blocked by politically powerful pharmaceutical and livestock industry interests for decades. Last year, Consumers Union launched its Meat Without Drugs campaign to convince grocery stores – starting with Trader Joe’s – to sell only meat raised without antibiotics.

Some 80 percent of all antibiotics sold in the U.S. are used not on humans but on livestock. These antibiotics are fed to healthy animals like cows, pigs, and chickens to make them grow faster and to prevent disease in often crowded and unsanitary conditions on today’s factory farms. While public health campaigns are helping to curb the overuse of antibiotics in humans, the livestock industry has steadily increased its use of antibiotics over the past decade.

When antibiotics are used on the farm, the bugs that are vulnerable to them tend to be killed off, leaving behind bacteria resistant to antibiotics. Antibiotic resistant bacteria can spread from the farm to our communities via meat and poultry, farmworkers, and through the air, soil, and water. As antibiotic resistance increases, the medications we all depend on become less effective.

Trader Joe’s Should Be A Leader

Over 500,000 consumers have signed petitions, postcards and flyers in support of Consumers Union’s campaign. However, Trader Joe’s has so far refused to change their practices or even meet with Consumers Union to discuss the issue. Trader Joe’s offers some chicken, turkey, and beef raised without antibiotics, but no pork. While this is a step in the right direction, it doesn’t go far enough, according to Consumers Union.

“Continuing to sell meat from animals that are routinely fed antibiotics contributes to the development and spread of antibiotic resistance,” said Halloran. “Trader Joe’s has demonstrated its commitment to its customers’ health by saying no to GMOs, artificial colors, and trans fats. It should take the obvious next step and help move the livestock industry in the right direction towards healthy animals raised without drugs.”