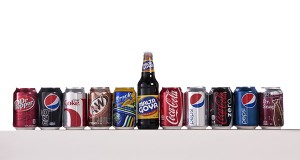 YONKERS, NY – In Consumer Reports’ recent tests of sodas and other soft drinks, varying levels of 4-methylimidazole (4-MeI), a potentially-carcinogenic chemical byproduct of the production of certain types of caramel color, were found in all of the samples that listed caramel color as an ingredient. Twelve brands of sodas and soft drinks from five manufacturers–including Coca-Cola, Pepsi, and Goya–were tested. The full findings are featured online at www.ConsumerReports.org.

“We are concerned about both the levels of 4-MeI we found in many of the soft drinks tested and the variations observed among brands, especially given the widespread consumption of these types of beverages. There is no reason why consumers need to be exposed to this avoidable and unnecessary risk that can stem from coloring food and beverages brown,” said Dr. Urvashi Rangan, a toxicologist and Executive Director of the Consumer Reports Food Safety and Sustainability Center.

Caramel color is used in certain food and beverages as a coloring agent and should not be confused with real caramel. Some types of this artificial coloring contain 4-MeI which has been recognized as a possible human carcinogen by the International Agency for Research on Cancer.

While there are no existing federal limits on the amount of caramel color allowed in food and beverages, products sold in California that would expose consumers to more than 29 micrograms of 4-MeI in a day are supposed to carry a warning label under the state’s Proposition 65 law.

Between April and September 2013, Consumer Reports tested 81 cans and bottles of various popular brands of soft drinks purchased in stores in California and the New York metropolitan region. Twenty-nine additional samples were purchased and tested in December 2013.

In its tests, Consumer Reports found that 12-ounce single servings of two products purchased multiple times during an eight-month period in the state of California–Pepsi One and Malta Goya–exceeded 29 micrograms per can or bottle. While we cannot say that this violates California’s Prop 65, we believe that these levels are too high, and we have asked the California Attorney General to investigate.

After we informed PepsiCo of our test results, the company issued a statement that said that Proposition 65 is based on per day exposure and not exposure per can. It also cited government consumption data that shows that the average amount of diet soda consumed by people who drink it is 100 milliliters per day, or less than a third of a 12-ounce can. For that reason, they believe that Pepsi One does not require cancer-risk warning labels—even if the amount of 4-MeI in a single can exceeds 29 micrograms.

Consumer Reports also found samples of Coke with average levels of 4.3 micrograms or less per serving, which is much lower than California’s threshold for labeling.

“While our study is not big enough to recommend one brand over another, our results underscore two key points: The first is that it is indeed feasible to get down to lower and almost negligible levels of 4-MeI. And the second is that federal standards are required to compel manufacturers to minimize the creation of this potential carcinogen,” said Rangan.

Other findings from Consumer Reports’ tests include:

What the Government Can Do

Consumers Union, the policy and action arm of Consumer Reports, has filed a petition with the U.S. Food and Drug Administration (FDA). Specifically, it is asking the FDA to:

At this point, the best consumers can do to avoid exposure to 4-MeI is to choose soft drinks and other foods that do not list “caramel color” or “artificial color” on their ingredient list.

Note:  Consumer Reports partnered with Johns Hopkins Center for a Livable Future to do the testing and the risk assessment. This project was made possible by donations to the Consumer Reports’ Food Safety and Sustainability Center.

Consumer Reports is the world’s largest independent product-testing organization. Using its more than 50 labs, auto test center, and survey research center, the nonprofit rates thousands of products and services annually. Founded in 1936, Consumer Reports has over 8 million subscribers to its magazine, website and other publications.  Its advocacy division, Consumers Union, works for health reform, product safety, financial reform, and other consumer issues in Washington, D.C., the states, and in the marketplace.