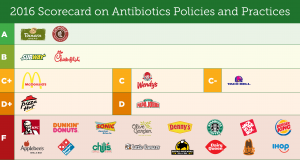 Subway and Wendy’s most improved; KFC, Olive Garden and 14 others get Fs

NEW YORK (September 20, 2016) – Since last year, twice as many of the nation’s top fast food chains are responding to the public health crisis of antibiotic resistance by adopting strong policies that prohibit the routine use of antibiotics, or medically-important antibiotics, in the meat and poultry they serve. This is according to the second annual Chain Reaction report and scorecard, released today by a group of consumer, environmental and health organizations, which grades America’s top 25 restaurant chains on their policies and practices regarding antibiotics use and transparency in their meat and poultry supply chains. The nine chains earning passing grades are Panera Bread (PNRA), Chipotle Mexican Grill (CMG), Subway, Chick-fil-A, McDonald’s (MCD), Wendy’s (WEN), Taco Bell (YUM), Pizza Hut (YUM) and Papa John’s Pizza (PZZA).

Today’s report, Chain Reaction II: How Top Restaurants Rate on Reducing Use of Antibiotics in Their Meat Supply, is being released amidst a public outcry from consumers and shareholders urging chains like KFC, Olive Garden and In N Out Burger to adopt policies prohibiting the routine use of antibiotics in the meat and poultry they serve. The results from Chain Reaction II come one day before a high-profile meeting of the United Nations General Assembly on antimicrobial resistance, a major global health crisis caused by the misuse of antibiotics by the medical community and livestock industry.

Research for the Chain Reaction II report, including the survey of the top 25 U.S. restaurant chains, was compiled by the Natural Resources Defense Council, Food Animal Concerns Trust, Friends of the Earth, Consumers Union, and Center for Food Safety.

“This year’s scorecard shows positive signs of change in the fast food industry,” said Sasha Stashwick, Sr. Advocate for Food & Agriculture at the Natural Resources Defense Council (NRDC). “But amid the steady drumbeat of company after company acting to end routine antibiotics use in their chicken supplies, chicken giant KFC now stands out as a major laggard. Despite receiving a call to action last month from over 350,000 concerned consumers, the company is still failing to do its part to protect people from superbugs.”

“Antibiotic resistant infections already cause more than 23,000 deaths and up to $55 billion in costs each year and antibiotic misuse in animal agriculture threatens to drive these numbers even higher,” said Steven Roach, Food Safety Program Director of Food Animal Concerns Trust.  “Even the CDC agrees that with the recent discovery of the latest colistin-resistant superbug, the end of the road for antibiotics is not far.”

“It’s exciting to see how investor and consumer pressure have inspired major restaurant companies, including McDonald’s and Subway to curb antibiotics in their meat supply,” said Kari Hamerschlag, deputy director at Friends of the Earth’s food and technology program. “Olive Garden and its parent company, Darden Restaurants, should follow this trend and heed their investor’s concerns by replacing their empty rhetoric with better animal welfare and antibiotics policies that require real change.”

“The future effectiveness of antibiotics depends on making sure they are used only when necessary,” said Jean Halloran, Director of Food Policy Initiatives at Consumers Union, the advocacy arm of Consumer Reports.  “By the end of 2016, Subway will join McDonald’s, Chipotle, and Panera in serving chicken raised without wasting these critical medications.  It’s time for all fast food restaurants to do their part to protect public health by no longer serving meat and poultry from suppliers who misuse these vital drugs.”

“This year’s progress is encouraging, but companies and consumers can only move the dial so far – it is time for the U.S. government to step up and mandate reductions in antibiotic use for the industry writ large. Without strong, enforceable regulations for antibiotic use in place, there is undue burden on the public to hold companies to their commitments, and to pressure the laggards in the industry to stop dragging their feet,” said Cameron Harsh, Senior Manager for Organic & Animal Policy, Center for Food Safety.

More than 70 percent of medically-important antibiotics in the United States are sold for use on livestock and poultry. More than 96 percent of those drugs are routinely distributed in feed or water—often to animals that are not sick to speed up growth and help animals survive crowded and unsanitary conditions on industrial farms.

This practice contributes to the growing epidemic of drug-resistant infections in humans. Leading medical experts warn that we must stop overuse of antibiotics in human medicine and animal agriculture, or else the life-saving drugs we rely on to treat common infections and enable medical procedures could stop working.

Conservatively, at least 2 million Americans are infected with antibiotic-resistant infections every year, and at least 23,000 die as a direct result, according to the Centers for Disease Control and Prevention. Earlier this year, scientists discovered a gene which allows bacteria to resist colistin–an antibiotic used as a last-resort when all other antibiotics fail–in the U.S. for the first time, raising the spectre of a kind of “super-superbug,” resistant to every life-saving antibiotic available.

The Natural Resources Defense Council (NRDC) is an international nonprofit environmental organization with more than 2 million members and online activists. Since 1970, our lawyers, scientists, and other environmental specialists have worked to protect the world’s natural resources, public health, and the environment. NRDC has offices in New York City; Washington, D.C.; Los Angeles; San Francisco; Chicago; Bozeman, Montana; and Beijing. Visit us at www.nrdc.org and follow us on Twitter @NRDC.

Food Animal Concerns Trust is a national nonprofit organization based in Chicago that promotes humane and healthy farms through science-based advocacy, consumer education, and support for humane farmers. Our mission is to improve the welfare of food producing animals, broaden opportunities for humane farmers, and address the public health problems that come from the production of meat, milk, and eggs. FACT has advocated eliminating the over-use of antibiotics in food animals for over 20 years.

Friends of the Earth fights to create a more healthy and just world. Our current campaigns focus on promoting clean energy and solutions to climate change, ensuring the food we eat and products we use are safe and sustainable, and protecting marine ecosystems and the people who live and work near them.

About Center for Food Safety

Center for Food Safety’s mission is to empower people, support farmers, and protect the earth from the harmful impacts of industrial agriculture. Through groundbreaking legal, scientific, and grassroots action, we protect and promote your right to safe food and the environment. Please join our more than 750,000 consumer and farmer advocates across the country at www.centerforfoodsafety.org. Twitter: @CFSTrueFood, @CFS_Press