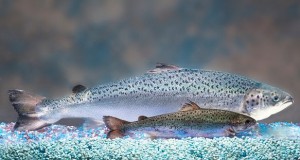 WASHINGTON, DC – Consumers Union, the policy and advocacy arm of Consumer Reports, today expressed deep disappointment as the FDA approved AquaBounty Technologies’ application for AquAdvantage Salmon, the first genetically engineered (GE) food animal on the market that is designed to grow to maturity in half the time of wild salmon. The agency is not requiring that the GE salmon be labeled as such, only issuing guidance for voluntary labeling of genetically engineered salmon and plants.

“We are deeply disappointed with the FDA’s decision to approve the AquaAdvantage salmon. And it’s even more concerning that the FDA chose not to require any form of labeling, making it extremely difficult for consumers to know if the salmon is GE or not,” said Michael Hansen PhD, Senior Scientist with Consumers Union.  “Consumers deserve to know what type of food they’re buying – and an overwhelming majority has told us that they want genetically modified food labeled in poll after poll. The decision to not require a GE label for this product takes away the consumer’s ability to make a truly informed choice.”

Consumers Union has commented at length to FDA about what it feels were inadequacies in both the agencies human and environmental safety assessments.  The group pointed to potential issues of increased allergenicity, as well as the potential for fish to escape from the hatchery and production facility as concerns.

The consumer group also pointed to today’s decision as even more cause for Congress to take steps requiring labeling for genetically engineered foods. Unfortunately, earlier this year, the House passed legislation that would prohibit mandatory labeling of genetically modified food. The Senate is currently working on legislation to address the issue. Consumers Union is urging lawmakers to support a strong bill that calls for meaningful national labeling that includes clear and straightforward text, not a code that must be scanned.

Hansen said, “This action by FDA today underlines more than ever why it’s important for Congress to require mandatory labeling of genetically engineered food rather than working to prohibit it. The Senate is currently deciding what to do about GMO labeling and a requirement for labels on salmon should be at the top of its list.”